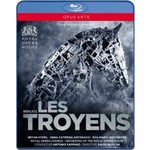 Les Troyens is a tour de force that ranges from fiery military marches to intense choruses, passionate soliloquies and the lyrical love duets of Dido and Aeneas. For Hector Berlioz, librettist and composer, the opera became the work of decades and the passion of a lifetime, the culmination of his literary love affair with Virgil's Aeneid and with two tragic heroines, Cassandra and Dido. David McVicar's staging is on an enormous scale, assembling one of the largest casts ever seen at Covent Garden. The sweeping theme of the rise and fall of empires runs throughout Les Troyens, along with moving meditations on love and honour.

"The singing cast is first rate. Berlioz himself was deeply moved by the figure of the doomed prophetess Cassandra and it pained him more than he could say that he would never hear her music sung. I am sure, though, that he would have been pleased with her portrayal by Anna Caterina Antonacci. She is a magnificent Cassandra, worthy to compare with the best of them. She is a very gifted tragedian as well as a superb singer, and her acting skills are helped by Rousillon's careful but not excessive use of close-up. On the whole, though, this release is a triumph.If you want Les Troyens on DVD, then you can buy this one with confidence."
(Recording of the Month MusicWeb Oct 2013)

"It is magnificent...McVicar marshals his huge forces with a sure hand and shows an impressive concern for detail...[Antonacci's] every phrase, every gesture, is mesmerising...Westbroek as Dido is so heartbreaking in the final scenes that you forget how dramatically inept they are; and Bryan Hymel is a match for Davis's Jon Vickers" (Gramophone)