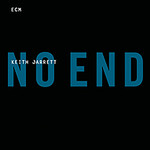 Recorded at his home studio in 1986, No End illuminates hitherto undocumented aspects of Keith Jarrett's music. He is heard here on electric guitars, electric bass, drums and percussion, overdubbing tribal dances of his own devising: "Somehow something happened during these days in the 80s that won't ever be repeated," he writes in his liner notes. "There was really, to my knowledge, no forethought or composition - in the typical sense - going on; just a feeling or a rhythmic idea or a bass line concept or melody. None of this was written down." On the instrumentation: "Drums were always with me in some way," Jarrett reflects. "I have always been drawn to instruments that you touch directly, without a mechanism in between. Therefore, I cannot say that I have ever loved the piano as much as the drums or guitar." With, primarily, these instruments (piano this time has only a cameo role) Jarrett has shaped one of his most unusual albums.
(ecmrecords.com)