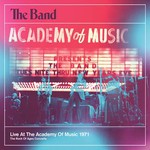 The Band
Live At the Academy of Music 1971

In 1971, The Band played a 4 night gig at The Academy of Music in New York City. The climax of the dates was on New Year's Eve. The Band played with a full backing band, including horns arranged by Allen Toussaint and encores including Bob Dylan. These shows became the original source for the "Rock of Ages" release in 1972.

The recordings have now been remixed by Bob Clearmountain and all 4 shows will be included in this release in their entirety. The full shows have never been released, in their original recorded sequence. Also accompanying the music is a stunning multi-page book documenting all of the shows. Many photographs have only recently been discovered and never publicly released. Liner notes are written by Robbie Robertson, Jim James (My Morning Jacket) and the members of Mumford & Son.