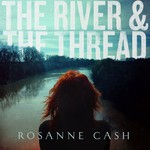 The River & The Thread, Rosanne Cash's first album in more than four years, will be released on January 17, 2014 by Blue Note Records. Cash wrote the album's 11 original songs with her longtime collaborator (and husband) John Leventhal, who also served as producer, arranger and guitarist.

The Chicago Tribune hailed Cash's 2010 bestselling memoir, Composed, as "one of the best accounts of an American life you will likely ever read." With The River & The Thread, Cash turns her attention to other American lives and locations. The album richly evokes the Southern landscape - physical, musical, emotional - and examines the indelible impressions it has made on our own collective culture and on Cash.