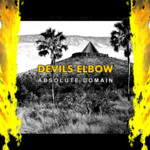 Now, smalltown shit-kicker rock band Devils Elbow return with their sophomore album Absolute Domain. The album was recorded at Hit Your Head Music in the band's hometown Napier 'Home Of Chloe Of Wainuiomata' and was mixed by Nick Poortman (Sade, Pluto, Napalm Death).

Recording started late 2011, drummer at the time Andrew Gladstone (ex-Garageland) plays drums on most it. Andrew (and bass player Dom Coyle) left the band early 2012. The album got put aside while a new line up was sorted out. Ben Lee (bass/vocals) and Adam Lamberg (drums) played in the band for a stretch then they quit too mid-late 2013 leaving the only original member Alec Withers to finish the album.

Throughout 2013 the album was completed and a new line up was cemented in cement. The band has set plans to carry on.