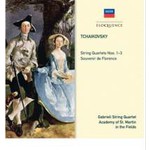 Although the orchestra was the most natural vehicle for Tchaikovsky's colourful and emotionally highly-charged music, in his string quartets (all dating from the 1870s) he showed a fine understanding of the medium and adopted a more purely musical train of thought - deriving in part from his deep fondness for the classical world of Mozart - without losing his own personality. Souvenir de Florence, his string sextet, dates from 1890-91 and Tchaikovsky confided in his friend Alexander Siloti that he feared he was thinking in orchestral terms before arranging his ideas for string sextet; the work is performed here in a version for string orchestra, from a much-praised Argo recording with the Academy of St. Martin in the Fields, which went on to win an EDISON AWARD.