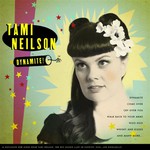 With a soulful voice straight from the golden age of country and rockabilly music, Tami Neilson has been described as the love child of Patsy Cline and Roy Orbison.

Singing her heart out along endless roads and stages, from her days as a young girl in the touring Neilson Family band opening for the likes of Johnny Cash to her full blossoming as a formidable talent in her own right, Tami Neilson has won the Tui "Best Country Album" Award for each of her past three albums.

In the past year Tami has performed at 5 international festivals in Australia and North America, headlined 4 national tours, working with "Grand Ole Hayride" and "The Gunslingers Ball", opened for Emmylou Harris at the Vector Arena and was chosen to pay tribute at Dave Dobbyn's induction into the Hall of Fame in a stunning performance at the prestigious Silver Scrolls. Now, with her explosive new album "Dynamite!" she's bound to turn even more heads.

Her first album to be recorded solely in New Zealand at The Sitting Room in Lyttelton and produced by Delaney Davidson and Ben Edwards, "Dynamite!" showcases Tami's skill at writing and crafting a song and her diversity as an artist.

Moving easily through blues driven numbers like "Walk (Back to Your Arms)" and "Dynamite", Tami shows us new facets in the jewel, her soulful side with "Cry Over You" and her maple-sweetness in "Honey Girl", before she kicks it up with rockin' numbers like "Woo-Hoo" and "Come Over". Those familiar with her previous work will be happy to hear the country lament "You Lie" and her bell-like "Texas", keeping one foot squarely planted in the country corner.

A couple of duets appear on the album: young Marlon Williams leaves us breathless while matching Tami word for word in the fun and frantic "Woo Hoo" , Ben Woolley croons with heartbreak of a spurned suitor in "Whiskey and Kisses", while fellow hay-rider Delaney Davidson's worries are kissed away in "Running to You".