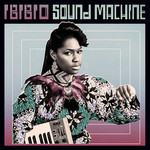 Folk stories, recounted to Eno by her family as a child in her mother's South-Eastern Nigerian Ibibio language form the creative lyrical fabric of the album. A unique sound born out of the mixed up nature of London today, Ibibio Sound Machine was started by producers Max Grunhard, Leon Brichard and Benji Bouton. After first tracking all the bass and drum tracks they joined up with Ghanaian guitar legend Alfred 'Kari' Bannerman (from fellow Soundway signing Konkoma), before adding Brazilian Anselmo Netto on percussion and synth/horn men Tony Hayden & Scott Baylis to Eno Williams' lyrics.

A dose of electronica with a forward-looking, refreshingly un-retro approach that's influenced by London as much as by West Africa, give the vocals and guitar lines space to breath without being overwhelmed.

From the banging sub-bass of 'Lets Dance' to the spiritual, gospel-tinged notes of the album's opening track 'Voice of the Bird', the band have turned in a dynamic and, at times, beautiful take on modern afro-soul music.