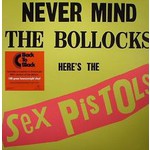 Never Mind the Bollocks, Here's the Sex Pistols is the only studio album by English punk rock group Sex Pistols, released on 27 October 1977.

Fans and critics alike generally regard it as one of the most important albums in the history of rock music, citing the lasting influence it has had on subsequent punk rock musicians, as well as other musical genres that were influenced by such punk rock artists.