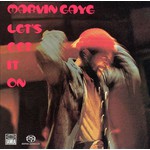 Marvin Gaye
Let's Get It On (LP)

After brilliantly surveying the social, political, and spiritual landscape with What's Going On, Marvin Gaye turned to more intimate matters with Let's Get It On, a record unparalleled in its sheer sensuality and carnal energy.

Always a sexually charged performer, Gaye's passions reach their boiling point on tracks like the magnificent title hit (a number one smash) and "You Sure Love to Ball"; silky and shimmering, the music is seductive in the most literal sense, its fluid grooves so perfectly designed for romance as to border on parody.

Side One:
Let's Get It On
Please Don't Stay (Once You Go Away)
If I Should Die Tonight
Keep Gettin' It On

Side Two:
Come Get To This
Distant Lover
You Sure Love To Ball
Just To Keep You Satisfied