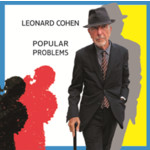 Leonard Cohen is a master songwriter, musician, poet, novelist and visual artist whose stunning body of original work has touched the lives of millions with a career spanning six decades.

On Popular Problems, his thrilling new studio album, Leonard Cohen gets down into the avenues of our dreams and sets a new tone and speed of hope and despair, grief and joy. Cohen here is an astonished lover rocking to the human condition as "the soul unfolds in the chambers of its longing." His legendary basso resonates as never before with a presence and urgency that arises from the very depths of the heart. The clarity and strength of these nine hypnotic songs will have us singing them over and over.

In collaboration with co-writer Patrick Leonard, Popular Problems is a masterpiece from the ever-fresh imagination of a musical legend whose songs continue to captivate new listeners and devoted fans.

Popular Problems was produced by Patrick Leonard, mastered at Marcussen Mastering and was recorded and mixed by Jesse E. String with additional mixing by Bill Bottrell. It is Leonard Cohen's 13th studio album.