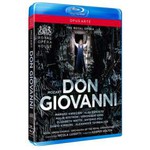 Mozart's sublime tragic comedy offers boundless scope for directors, and Kasper Holten has chosen it to follow his directorial debut of Eugene Onegin. He wanted to shift the emphasis from Don Giovanni's sex life into a darker place, showing Giovanni's womanizing as an attempt to stave off his own mortality. Each woman he seduces represents a life he could have had. Though it is a dark piece, Holten handles it with a light touch and works with a superb cast - Mariusz Kwiecien, one of the world's leading Don Giovannis, Alex Esposito, a fresh, vigorous Leporello and acclaimed French soprano Véronique Gens.

Set designs including innovative use of projections are by Es Devlin (most recently at the Royal Opera House with Les Troyens), Nicola Luisotti conducts.