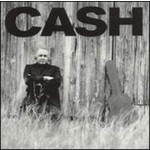 Unchained is the second album in Johnny Cash's American Recording series and his 82nd overall. Like all Cash's albums for American, Unchained was produced by Rick Rubin. On the album, Cash is backed by Tom Petty and the Heartbreakers as well as guest appearances from Flea, bassist from the Red Hot Chili Peppers, on "Spiritual", and Lindsey Buckingham and Mick Fleetwood on "Sea of Heartbreak".

Unchained contains songs by Tom Petty ("Southern Accents"), Soundgarden ("Rusty Cage") and Beck ("Rowboat"). In comparison with the country folk sound of Cash's other American Recordings' albums, this one has more of a hard, true country rock sound.

Unchained received a Grammy for Best Country Album and Cash was nominated for Best Male Country Vocal Performance for his version of "Rusty Cage".