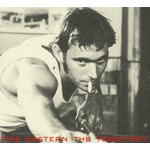 The Eastern
The Territory

The Territory is the fourth album in six years from Christchurch based Lyttelton raised string band The Eastern. It was recorded, as were the previous three with courage, friendship and grace by the kind hearted, quick handed, coopers cupping, and baby making Ben Edwards at his Sitting Room Studio on Hawkhurst St. in Port Lyttelton New Zealand.

It has bagpipes, banjos, fiddle and as much acoustic fury (fury of both the quiet and loud kind) crammable into a bunch of folk songs, yet the electrics keen and the drums kick along and the bass rumbles and the trombone takes the air and pushes through just enough to keep the set interesting.

The Eastern are lifers in this folk singing business, they make the rent playing music and spend most days of the year getting reading for soundcheck, packing down the speakers and coiling the leads.

With over 1000 shows played over god knows how many miles they have proudly garnered a reputation as one of New Zealands hardest working bands. A reputation they carry with pride. They have shared stages with Steve Earle, Old Crow Medicine Show, and even Fleetwood Mac.

Sad But True: The Secret History of Country Music Songwriting Vol. One