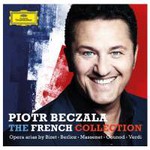 The remarkable Piotr Beczala has just won a prestigious ECHO Klassik award for "Singer of the Year" 2014 - and at the incredible gala event, he performed Massenet's "Pourquoi me réveiller", which will be on his brand new album. Now, this world-leading tenor makes an awaited return to the studio and records a collection of best-loved operatic arias that lie at the core of his repertoire, all connected to France or Paris (either by French composers, or composed for the city of love, Paris). He is joined on this occasion by the German star soprano Diana Damrau.

Piotr Beczala is praised worldwide for his flawless, elegant delivery, immaculate musicianship and keen interpretive intelligence. His previous (and debut) album on DG was extremely well received by audience and press worldwide. Diapason d'Or in France, 10 in the Dutch magazine Luister, a glowing review in the Australian limelight: "if, like me, you are a fan of Richard Tauber, or if you just want to hear the best tenor since Nicola Geddai in this repertoire, you really must buy the album."

Now, Piotr Beczala records his first solo operatic album with Deutsche Grammophon. It will contain famous arias from Berlioz, Gounod, Massenet, Verdi and others. A perfectly cultivated and stylish singer, he is currently at the absolute peak of his career and shows deep affinity with the repertoire.

"Polish tenor Piotr Beczala has been singing on the opera stage since 1997. His career took off internationally in 2004 leading to a burgeoning repertoire of bel canto and Romantic opera roles. This is Beczala's first solo operatic album on Deutsche Grammophon and should provide the necessary international reach his talent deserves. Deutsche Grammophon once again deliver clarity and presence with an excellent balance secured between soloist and orchestra. Add to this well-paced conducting from Alain Altinoglu and crisp playing throughout. This compellingly desirable collection makes a real impact and again presents Beczala as a tenor whose reputation proceeds from strength to strength." (Recording of the Month MusicWeb March 2015)

'A wide variety of dynamics and some thrilling top notes bring Beczala success as Massenet's doomed Romantic poet in Werther … He fines down his voice to a perfect pianissimo in the extract from Berlioz's Damnation of Faust, in which the Lyon orchestra, conducted by Alain Altinoglu, makes something extraordinarily refined out of the postlude; indeed they are excellent throughout' BBC Music Opera Recording of the Month June 2015