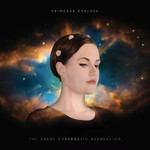 Building upon the success of her 2011 debut Lil Golden Book, which spawned the internet sensation "Cigarette Duet" (which has racked up nearly twenty million hits on Youtube), Princess Chelsea's new album is a sparkling, glittering epic, weaving layers upon layers of synths to create a fantastical universe that is out of this world.

Her background in classical music lends a darkly baroque flair to the sound, with the songs more like compositions than traditional "synth pop", weaving unconventional song structures with very dense "wall of synth" arrangements to create a sound that has been described as "retrofuturistic".

With influences ranging from Kraftwerk to Tomita and Eurythmics part of the inspiration behind the album was to recreate the magic of childhood sci-fi movies like The Neverending Story, sounding like the future as she imagined it when she was ten.

In homage to the many great 70s synthesizer records that would have a concept or story behind them, Princess Chelsea's new LP is themed around a made-up metaphorical world event 'The Great Cybernetic Depression' , which happens sometime in the future (about ten years from now). Depression can sometimes feel like the apocalypse to an individual and referencing this fictional event several times throughout the album, Chelsea channels her anxieties and sings about personal relationships over the past three years, weaving in and out of her narrative.

With The Great Cybernetic Depression, Princess Chelsea blends a significant space obsession with wry, personal and sometimes mundane lyrics, creating a playful narrative on modern life with a dramatic deadpan delivery. Jonathan Bree, member of The Brunettes and the album's co-producer duets on the Magnetic Fields-esque, "We Are Strangers", and plays drums and guitar on the album. The other featured duettist is Joe Astle on "Is it All OK", who is in the California band Boa Constrictors. Chelsea's cat 'Winston' is also featured on the record - he was sampled crying in the bathroom in the song "Winston Crying on the Bathroom Floor".

Side A:
When the World Turns Grey
Is It All OK?
No Church on Sunday
Too Many People
We Are Very Happy

Side B:
We Were Meant 2 B
Winston Crying on the Bathroom Floor
We Are Strangers
We're So Lost
All the Stars