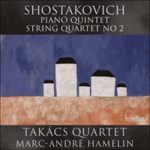 "Right from the very first bar I felt that these were going to be fine performances of these two Shostakovich works. The first movement of Quartet No.2 is played with vigour and forward thrust. Although the recording is rich and warm, with excellent balance, the textural complexity is delivered with clarity and transparency by the musicians and recording engineers. The movement is a well-rounded structure with the classical proportions of sonata form; the Takács set a good tempo and show command of the style. Both works are superbly recorded by Hyperion and David Fanning's programme notes are informative as well as superbly and imaginatively written." (Recording of the Month MusicWeb April 2015)

"The great Soviet composer's chamber music is new to the discography of the Takacs, arguably the world's most versatile string quartet. Here they strike up a tingling rapport with one of Hyperion's "house" pianists: sparks fly between the French-Canadian and the British/Hungarian string players." Sunday Times

"The natural sheen of the playing and a true feeling of ensemble are qualities that have long been hallmarks of the Takács's performances, and here they are combined with a haunting atmosphere...a determined rhythmic impetus and an astuteness in pointing up accents...[Hamelin] launches the first movement [of the Quintet] with a decisive thrust to which the string players respond with marked intensity." Daily Telegraph

a highly engrossing experience...the Takács come to the music from a somewhat different angle to their Soviet and Russian counterparts, emphasising closer connections with Western musical traditions than is usual... Hamelin's supremely intelligent chamber music playing providing an admirable foil to the subtle textures conjured by the string players." BBC Music Five Stars

Bruckner: Symphony No. 9 in D Minor