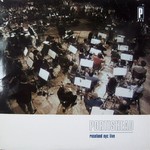 Performing with a 35-piece orchestra, Portishead runs through selections from its two albums, favoring its second slightly. On the surface, it doesn't seem like the orchestra would add much to the performances, especially since the arrangements remain similar, but its presence makes the music tense, dramatic, and breathtaking. This is especially true of the material from Portishead. On album, several of these songs sounded a little flat, but here they soar right alongside such staples as "Mysterons," "Sour Times," and "Glory Box." - AllMusic