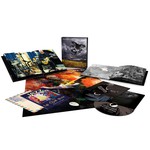 Memorabilia including poster, postcard and plectrum.

The CD and DVD are housed in colour card wallets with colour labels.