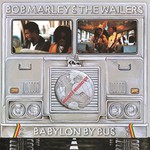 Arguably the most influential live reggae album ever, Babylon by Bus captures Bob Marley and the Wailers during the European leg of their Kaya tour in the spring of 1978. The success of this set was not entirely unexpected, however. If the universal and widespread acclaim of LIVE! -- their first concert recording -- was an indicator, all involved knew that a Bob Marley & the Wailers performance contained unique energies and a vibe all of its own. Sharply contrasting the somewhat pastoral grooves of the Kaya album, Babylon by Bus possesses a more aggressive sound -- which was a trademark of this particular band. Tyrone Downie's progressive rock keyboard flavors on "Exodus," as well his judiciously located percussive clavinet accentuations during "Punky Reggae Party," lock in with Aston "Familyman" Barrett's viscous basslines to create something akin to psychedelic reggae or even along the lines of Parliament/Funkadelic. Likewise, "Heathen" highlights Anderson's explosive guitar leads, which are distinctly reminiscent of Eddie Hazel from his early days with Funkadelic. The lead guitar solos on "Rebel Music (3 O' Clock Roadblock)" and "Is This Love" also define Al Anderson's innovative and decidedly Western guitar style, as it is seamlessly and thoroughly integrated with Marley and the Wailers. As with their first concert album, Babylon by Bus highlights material from the band's history up to that point. "No More Trouble" is placed in an entirely new context when linked with "War," which features lyrics taken from a United Nations speech given by Haille Selassie I, the Ethiopian emperor considered the father of modern Rastafarianism. Other early tracks, such as "Kinky Reggae" and "Stir It Up," prove to be not the only favorites of concert attendees. More recent offerings of "Is This Love," "Jammin'," and "Exodus" actually garner the most audible support. Without question, Babylon by Bus is an integral component of any popular music collection. - AllMusic