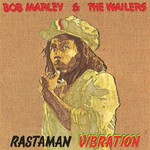 For Bob Marley, 1975 was a triumphant year. The singer's Natty Dread album featured one of his strongest batches of original material (the first compiled after the departure of Peter Tosh and Bunny Wailer) and delivered Top 40 hit "No Woman No Cry." The follow-up Live set, a document of Marley's appearance at London's Lyceum, found the singer conquering England as well. Upon completing the tour, Marley and his band returned to Jamaica, laying down the tracks for Rastaman Vibration (1976) at legendary studios run by Harry Johnson and Joe Gibbs. At the mixing board for the sessions were Sylvan Morris and Errol Thompson, Jamaican engineers of the highest caliber. Though none of these cuts would show up on Legend, Marley's massively popular, posthumous best-of, some of the finest reality numbers would surface on the compilation's more militant equivalent, 1986's Rebel Music set. "War," for one, remains one of the most stunning statements of the singer's career. Though it is essentially a straight reading of one of Haile Selassie's speeches, Marley phrases the text exquisitely to fit a musical setting, a quiet intensity lying just below the surface. Equally strong are the likes of "Rat Race," "Crazy Baldhead," and "Want More." These songs are tempered by buoyant, lighthearted material like "Cry to Me," "Night Shift," and "Positive Vibration." Not quite as strong as some of the love songs Marley would score hits with on subsequent albums, "Cry to Me" still seems like an obvious choice for a single and remains underrated. Though record buyers may not have found any single song to be as strong on those terms as "No Woman No Cry," Rastaman Vibration still reached the Top Ten in the United States. - AllMusic