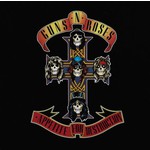 Already a legend in its own meagre lifetime, this startling debut shrouded itself in controversy, from its original Robert Williams artwork to Axl Rose's unblinking accounts of LA's underbelly. This mawkish storytelling, combined with a brattish collective swagger and a surprisingly mature approach to their songs, guaranteed Guns N' Roses a speedy notoriety that was to serve their legend brilliantly. From the laconic "Paradise City" to the achingly beautiful "Sweet Child O' Mine," or the furious "Welcome To The Jungle," the record brims with a brutal integrity. An album they could never surpass even if they had stayed together.

Side A:
Welcome To The Jungle
It's So Easy
Nightrain
Out Ta Get Me
Mr. Brownstone
Paradise City

Side B:
My Michelle
Think About You
Sweet Child O' Mine
You're Crazy
Anything Goes
Rocket Queen