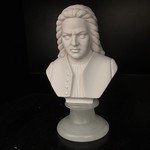 This item is only available to us via Special Order. We should be able to get it to you in 3 - 6 weeks from when you order it.

These charming figurines were created by A Giannelli in Volterra, a city in the heart of Italy's alabaster district. His work is in the tradition of the great Italian masters.

Giannelli created the original moulds for these sculptures. The figurines are composed of alabaster dust mixed with a durable binding compound. Each piece is expertly crafted with painstaking care and attention to fine detail.

A Giannelli's experience is impressive. Born in Volterra, he was a keen student of sculpture from the age of ten. He graduated from the Royal School of Art in 1924 and achieved the accolade of 'Master' at the Nardoni Workshops. In 1944 he opened his own studio, with work consisting mainly of commissions from the Allied Forces. In 1953 he was appointed president of the Alabaster Craftsmen Guild, a position he held until 1961. For his professional achievements he was awarded the title of "Cavaliere" (the Italian equivalent of a Knighthood) in 1970.

Note: these figurines are hand made and there may be slight differences in colour and texture from one to another. These differences are slight, and are testament to their artisan workmanship.