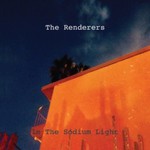 The Renderers
In The Sodium Light

The seismic rumbling of The Renderers goes beyond the fiendish pastoralia of their music. Long-time Christchurch residents, Brian and Maryrose Crook witnessed the earthquakes crumble the city. That, and Maryrose's developing career as a painter (she is self-taught, only starting in her late thirties), inspired them to explore the world a bit. So, where do they travel? Obviously, a rock-throw's distance from the San Andreas Fault, to Joshua Tree. Not surprising, given the tenacity of the Crooks. Through endless band lineups and continual challenges, they have maintained a focused sound and approach to their music. A Renderers song creates its own space, one that threatens dissemblance at every turn. With two of the most distinct voices in New Zealand rock, they trade off vocal duties, and both contribute toward burying their songs in layers of swelling and swirling guitars. For their new record, In the Sodium Light, The Renderers take a step back from the furious chug of their last album, A Rocket Into Nothing. Instead, they appear to be representing the landscape of their new home. Songs creep out of holes, seep and spread, permeating the room. The album is a languid, calm-waters drift over the abyss in a glass-bottomed boat. Let the tide take you.