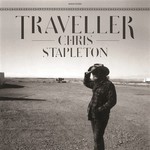 Traveller is the debut studio album by American country artist Chris Stapleton. Described by the critics as an old-school country, Southern rock record, it was named Album of the Year at the 2015 Country Music Association Awards and won the Grammy for Best Country album.

Tracks on the album features electric guitar, mandolin, and acoustic guitar. "The Devil Named Music" exclaims the hard life on the road, "Might As Well Get Stoned" features resignation lyrics, and "Sometimes I Cry" is a blues song. "Daddy Doesn't Pray Anymore" shrouds reflections about his father in the language of religious backsliding. In an interview for Rolling Stone, Stapleton commented "If somebody tells me it sounds dated, I'd say that's great, as long as the date is 1978. My favorite things are from then."

Stapleton wrote or co-wrote all but two of the album's 14 tracks. The album features a blues-influenced cover of George Jones' single "Tennessee Whiskey", and Charlie Daniels' "Was It 26," written by Don Sampson.