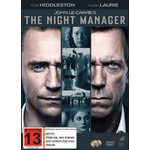 Multiple Emmy nominee Hugh Laurie (House) and Tom Hiddleston (The Avengers, Thor) star in a contemporary interpretation of le Carré's espionage drama. The Night Manager brings together love, loss and revenge in a complex story of modern criminality. The series follows former British soldier Jonathan Pine (Hiddleston) as he navigates the shadowy recesses of Whitehall and Washington where an unholy alliance operates between the intelligence community and the secret arms trade. To infiltrate the inner circle of lethal arms dealer Richard Onslow Roper (Laurie), Pine must himself become a criminal.