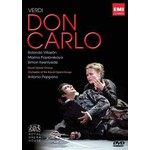 Don Carlo is Verdi's musical retelling of Schiller's poem Don Carlos. Set amidst the political, religious and sexual intrigue of the 16th century Spanish court, this epic work is the tragic story of the virtuous young prince, Don Carlo when he is pitted against the powers of a dominant, corrupt society.

The Italian version premiered at Teatro alla Scala in Milan on 10th January, 1884, following the French premiere (Don Carlos) in 1867, at the Paris Opera. It was first staged at The Royal Opera House in 1886. This new production is the first new version of the 5-Act complete opera to be staged at Covent Garden in 50 years. With sets and costumes by Bob Crowley, direction by Nicholas Hytner and an enviable cast, this production of Don Carlo is worthy of the greatness of Verdi's original, masterful work.

"Supported by designer Bob Crowley's dazzling coups de thêatre, and by Antonio Pappano's band in scintillating form, he directs with such vivid forcefulness - and such psychological acuity - that Verdi's great rumination on theocracy, and on the battle between patriarchy and the brotherhood of man, emerges in its full beauty and menace…Ferruccio Furlanetto's King Philip, a commanding presence conveying as much by his stillness as by his gloriously resonant voice…This full five-act version is a long evening, but time flies thanks to transcendent performances by Poplavskaya and Villazón, and to the beauty emanating from the pit". The Independent

"as fine an example of singing by a tenor in Verdi as we have heard in many a year: elegant in detail, movingly expressive and endowed with that special beauty of tone which was Villazon's distinctive gift...he sustained the demanding role without any sign of tiring, forcing or losing quality towards the end" (Gramophone)

"the love-torn relationship of the titular prince and the fiancée stolen from him by his father the king is sensitively staged and played: Rolando Villazon (in less uncertain voice than reportedly on opening night) and Marina Poplavskaya, a regal beauty much-loved by the camera, make it all movingly fresh...Pappano's urgently impassioned conducting...lends everyone unfailing support." (BBC Music)