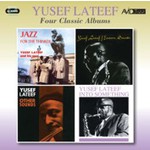 AVID Jazz presents four classic Yusef Lateef albums including original LP liner notes on a finely re-mastered and low priced double CD.
"Jazz for the Thinker"; Eastern Sounds"; Other Sounds" and "Into Something"
Currently only available on vinyl LP, Avid are pleased to make "Jazz for the Thinker" available as part of our ongoing "Four Classic Albums" series. To quote from the original liner notes regarding the music within this debut album…"their music combines elements of the current "hard bop" approach with Afro - Asiatic tinges, a needed sense of dynamics and extended form, plus a sense of humour and joi de vivre, so seldom found in today's jazz". Joining the man with….. "the mild aura of cultism" around him are Curtis Fuller on trombone, Ernie Farrow on bass, Hugh Lawson on piano and Louis Hayes on drums. Here's another quote from the original liner notes to "Eastern Sounds"…."the idea of the album was to have an Oriental feel". To that end you will find references to such instruments as the Chinese globular flute (12 hundred years old!) and the Indian rabat. Of the players, Lateef is heard playing tenor sax, oboe and flute, Barry Harris is on piano, Ernie Farrow bass and rabat and Lex Humphries on drums. Back to the liner notes …."Lateef announces himself pleased with the album…..Lateef will surprise the jazz public on this set….it would be nice if they surprised him with acceptance". Prepare to be surprised and accepting!! A listing of players and instruments on "Other Sounds" will give you some idea of where the title for this album came from! Yusef Lateef-tenor sax, flute and argol; Wilbur Harden-flugelhorn; Hugh Lawson-piano, Turkish finger cymbols; Ernie Farrow-bass, rebob; Oliver Jackson-drums, earth-board. The former Bill Evans adopted the muslim faith in 1950 and became Yusef Lateef . His jazz background was a traditional one playing with the likes of Dizzy Gillespie (as Bill Evans), Lucky Millander, HotLips Page and Roy Eldridge. His bands had always been "dedicated to playing swinging music in the tradition of Charlie Parker, Dizzy, Miles Davis, Bud Powell and Sonny Stitt. However as you will hear, "other sounds" were introduced giving the group "a distinct character of its own". Recorded in 1961 "Into Something" features Yusef on tenor sax, flute and oboe, Barry Harris on piano, Herman Wright on bass and Coltrane's drummer, the legendary Elvin Jones, who also assisted Lateef in setting the right tempos for each tune. Let's leave the last words to Yusef Lateef from the original liner notes …."What I'm always striving for is contrast-as wide a range of moods, forms and textures as I can create. You've got to have depth of feeling…..You've got to believe in what you're doing….Yusef is indeed always getting "into something" not only new ways of shaping music, but new insights into the man creating the music"
All four albums have been digitally re-mastered