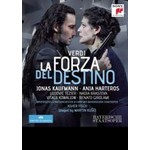 "A large part of the characterisation comes from the sheer quality of Harteros's singing, poised and perfectly shaped, with an impeccable sense of style, the voice itself slightly hazy in colour but totally focused. This is a wonderful performance...Tézier is hardly less stylish, and sings with thrillingly rich and generous tone." (Gramophone Blu-ray of the month June 2016)

"Anja Harteros, who seemed uncomfortable as Leonora in Munich's recent production of Il Trovatore, made the role of the Forza Leonora her own in every way. It was not only that her singing was exquisite, her crystal-clear voice strong and communicative in every register, but the way she delved to the heart of her character that made her interpretation complete...As Alvaro, Jonas Kaufmann was overwhelming. At full voice, he is without rival, and his full voice held out through the entire evening. His tone is luscious and thrilling." OperaNews

"The reason why this production provoked so much excitement is that Munich had managed to assemble the finest Verdi cast available to sing the opera. It is crowned by a magnificent Leonora from Anja Harteros, perhaps the best thing she has done on disc. Her rich, creamy tone makes her just about perfect for Verdi's great lyric roles. Her voice has the technique to conquer the tessitura and the size to make it sound effortless, filling the role like the wind filling sails." (MusicWeb Recording of the Month June 2016)