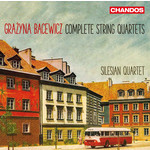 For their very first recording on Chandos, the multi-award winning Silesian Quartet presents the complete string quartets by Grażyna Bacewicz. These lesser-known chamber music treasures by the Polish composer are presented in two albums, offered for the price of one.

"These seven works, composed between 1938 and 1965, add up to a compelling portrait of a powerfully original creative spirit...the whole group seem to understand this life-affirming music from the inside." Gramophone Magazine Award WINNER 2017 - Chamber

"their default playing style is springy and fleet-footed, bringing out the idiomatic nature of Bacewicz's string writing." The Guardian, 21st July 2016 ****

"This remarkable canon of works here receives advocacy of the highest order: equally at home in the instantly approachable early quartets as the more challenging sixth and seventh, the Silesian Quartet brings admirable focus, determination and concentration to every bar" Classical Music, August 2016 ****

"This is now the favoured option in this repertoire." MusicWeb International, 20th October 2016