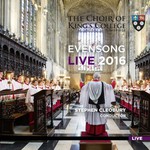 Evensong Live 2016 is a selection of the best weekly webcasts recorded during the preceding academic year (2014-15). Real services at King's College Chapel are recorded using a state-of-the-art recording system concealed in the roof, vestry and organ loft. Microphones are suspended discreetly above the choir stalls, recording each of the choir's services and performances.

This album showcases the best performances during the year, as selected by the choir's Director of Music, Stephen Cleobury, providing a cross-section of the daily music making at King's, and capturing the atmosphere and acoustic of the Chapel. It serves as a snapshot of the choir at a specific moment in time and presents evensong as one of the jewels of our national heritage: not a relic, but a living and breathing part of our culture. The choir at King's performs evensong six times a week, in addition to Sunday eucharist or matins, furnishing the liturgy with music on a daily basis. This tradition has fostered many of the greatest choirs, singers and organists in the world.

This selection of music This release joins the label's other, critically-acclaimed, recordings including: 'English Hymn Anthems', a Gramophone Editor's Choice; 'Fauré: Requiem', Classic FM Album of the Year 2014; and '1615: Gabrieli in Venice', the first classical album to utilise Dolby's groundbreaking Atmos technology.

"There are many subtleties in this set of performances. The intimate interplay between the crystalline solo of treble Tom Hopkins and his fellow choristers in Stanford's Magnificat is one of them … [Highlights include] Twas the year that King Uzziah died, a gripping setting by King's alumnus George Benjamin, where tenor Toby Ward is an eloquent soloist" BBC Music