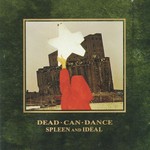 Dead Can Dance's 'Spleen & Ideal' is regarded as the album in which the band would come to define its sound and style for the remainder of its career. The straightforward Goth affectations are exchanged for a sonic palette and range of imagination.

'Spleen & Ideal' is the band's second album and its title is directly taken from "Spleen et Idéal", a collection of poems by French poet Charles Baudelaire which form a section of his magnum opus Les Fleurs du mal.

1.De Profundis (Out of the Depths of Sorrow)
2.Ascension
3.Circumradiant Dawn
4.The Cardinal Sin
5.Mesmerism
6.Enigma of the Absolute
7.Advent
8.Avatar
9. Indoctrination (A Design For Living)