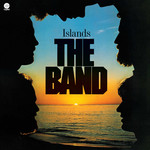 Released in 1977, Islands was the 7th studio album from the group and the last new release featuring all five original members of The Band. The title is now reissued on 180g Vinyl in original packaging.

Primarily composed of previously unreleased songs from The Band's career (including their 1976 cover of "Georgia on My Mind," which was recorded to aid Jimmy Carter in his presidential bid), Islands was released to fulfill the group's contract with Capitol Records, so that the soundtrack to their film The Last Waltz could be released on Warner Bros. Records. In the CD liner notes, Robbie Robertson compares the album to The Who's Odds & Sods.

"The playing, as ever, was impeccable..." -William Ruhlmann, allmusic.com