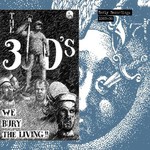 The 3Ds
We Bury the Living

Researched and compiled by Bruce Russell (Dead C) The 3Ds - Early Recordings 1989-90 is exactly that. A selection of tracks from the Dunedin bands formative years.

Done on a porta-studio, many of these unheard demos were originally recorded for Xpressway, and the album also includes a version of Meluzina Man off the Xpressway Pile Upcompilation.The compilation comes with a 16pp booklet with liner notes written by Bruce Russell detailing the history of the band.

Having re-released The 3Ds three albums - Hellzapoppin (1992), The Venus Trail (1993) and Strange News From The Angels (1996) - last year, Early Recordings show how this melodically noisy outfit, that went on to influence the likes of Superchunk and Pavement, all began.