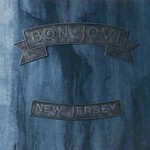 Bon Jovi had perfected a formula for hard pop/rock by the time of New Jersey, concentrating on singalong choruses sung over and over again, frequently by a rough, extensively overdubbed chorus, producing an effect not unlike what these songs sounded like in the arenas and stadiums where they were most often heard. The lyrics had that typical pop twist -- although they nominally expressed romantic commitment, sentiments such as "Lay Your Hands on Me" and "I'll Be There for You" worked equally well as a means for the band and its audience to reaffirm their affection for each other.
4.5 / 5 All Music Guide.