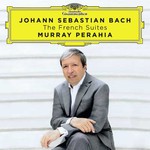 One of the world's best-loved artists, and a longtime proponent of Bach on the modern piano, Murray Perahia has been hailed as one of the composer's "most rewarding interpreters both live and on disc."

For his debut recording on Deutsche Grammophon, Perahia turns to the six French Suites - works that are at once delicate, profound, tender and joyful, and all suffused with the rhythmic vitality of the dance.

Perahia produced a series of award-winning recordings of Bach's keyboard works in the late 1990s and since then Bach has become his bench mark.

"As we expect from Perahia, everything sounds natural and inevitable. Ego doesn't come into it: rather, he acts as a conduit between composer and audience with a purity that few can emulate...I've only had this recording for five days but I predict a long and happy future in its company." Gramophone award WINNER 2017 - Instrumental

"In Perahia's hands every note of the music sings and its siren beauty is surely impossible to resist." Financial Times

"Perahia is unrivalled in coaxing a subtle dialogue in the dances that resort to the artful pared-back minimalism of the two-part invention. There's nowhere to hide and Perahia's effortless variety of touch, love of teasing voice-leading, and conversational affability would have it no other way…this is a set that gets ever more persuasive on repeated listening" BBC Music Disc of the Month December 2016 Five Stars