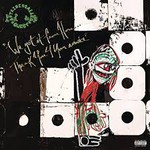 A Tribe Called Quest
We Got It From Here...Thank You 4 Your Service (Double LP)

A Tribe Called Quest - Q-Tip, Phife Dawg (who died on March 22nd, 2016), Ali Shaheed Muhammad, and Jarobi White - the groundbreaking '90s group that forever transformed the urban music landscape, detonates new shock waves on their first - and last - new studio album together in 18 years, WE GOT IT FROM HERE… THANK YOU 4 YOUR SERVICE. WE GOT IT FROM HERE… represents the first new music from A Tribe Called Quest since they disbanded in 1998, after recording THE LOVE MOVEMENT, their final album together.

Queens, New York natives Q-Tip, Phife Dawg, and Ali Shaheed Muhammad of Brooklyn, formed A Tribe Called Quest in 1985. The group is one of hip-hop's most legendary, beloved and revered groups of all time. Easily recognized for their unique approach to rap music by employing jazz infused soundscapes to Afro centric rhymes, ATCQ was largely responsible for the popularity of a new genre that dominated the East Coast sound of the early 1990s.

A Tribe Called Quest would go on to record three US certified platinum hip-hop masterpieces, THE LOW END THEORY (1991, including the US #1 'Check the Rhime'); MIDNIGHT MARAUDERS (1993, with 'Award Tour', 'Electric Relaxation' and 'Oh My God' featuring Busta Rhymes); and BEATS, RHYMES AND LIFE (1996, with 'Stressed Out' featuring Faith Evans); before calling it a day on THE LOVE MOVEMENT (with 'Find A Way') in 1998.

Side A:
The Space Program
We The People
Whateva Will Be
Solid Wall Of Sound

Side C:
Mobius
Black Spasmodic
The Killing Season
Lost Somebody