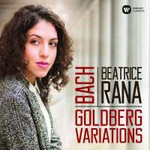 Bach was the composer who most obsessed Beatrice Rana as a child, and in a recent interview with Pianist magazine, she confessed that it would be his music, and above all the Goldberg Variations, that she would choose if she had to devote her life to a single composer. As she said: "I'm very happy to be going back to Bach … It's best to avoid Bach in competitions … you can't expose yourself to be totally killed by the jury! But Bach is my first love; now I am allowed to play it in public and I'm really looking forward to that."

"the Goldbergs of Angela Hewitt and Murray Perahia have been my touchstone, and I never expected to find another that would go close to them, yet here is one that has achieved just that, providing a different view of this wondrous music.Without a shadow of a doubt, this is my first Recording of the Year for 2017; I believe it will be the best I will hear all year, and possibly for years to come." Recording of the Month MusicWeb April 2017

"Beware! I put on this disc and found myself barely able to move for the 78 minutes of Bach's masterpiece, so familiar yet suddenly so new. Rana's playing has a kind of Orphic seductiveness, a transcendent lightness of touch...A supremely intelligent reading." Sunday Times

"Her detailing is one of the aspects that makes this performance so compelling, be it the bringing out of a new line in the repeat, subtle changes in phrasing, a touch of pedal - examples are to be found in every single variation...the return of the Aria is as emotionally multifaceted as you would expect - mysterious, quizzical, noble, resigned, hopeful - setting the seal on a life-affirming disc." Gramophone Award Nomination 2017 - Instrumental

"Every piece in Rana's tapestry is vividly characterised, and none are overblown, didactic or taken at an extreme tempo. The alternating comedy, grandeur, and exultant cleverness of the up-beat variations surges boldly out, while the seemingly endless melody of Variation 13 feels at moments suspended in mid-flight, the lamentation of Variation 15 cries to the heavens, and the tragedy of the 'Black Pearl' becomes heart stoppingly profound. For this CD, five stars are not enough." BBC Music

"I can only imagine what it would be like to encounter the Goldberg Variations for the first time by way of this recording. Bach aficionados and collectors would be amiss to pass on this release, which will stand out from the reliable production of GV recordings for a long time to come." AudAud Five Stars

"We were astonished at the musical reach and grasp of this young Italian pianist. The sunlit Aria and initial fleet variations show a remarkable technique, but it is in the later descent and "Black Pearl" that Rana measures up to the impossibly high standards of her predecessors. Audiophile Audition has this to say about her artistic wisdom:

It is in the depths of the Goldberg Variations that we are finally able to evaluate just how good a performance is. The marks of the best performances of this work are the ability to transcend mere technical challenges and to leave the instrument behind so as to comprehend the special universe of this creation in all its darkness and light." AudAud Best of 2017