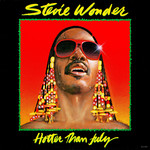 Four years after the pinnacle of Stevie Wonder's mid-'70s typhoon of classic albums, Hotter Than July was the proper follow-up to Songs in the Key of Life (his Journey Through the Secret Life of Plants concept record was actually a soundtrack to an obscure movie that fared miserably in theaters).

It also found Wonder in a different musical climate than the one that savored his every move from 1972 to 1977. Disco and new wave had slowly crept their way into the mainstream record-buying public, and hindered the once-ample room for socially and politically charged lyrics.

However, Wonder naysayed the trends and continues to do what he did best. Solid songwriting, musicianship, and production are evident in the majority of Hotter Than July. Wonder also carries on his tradition of penning songs normally not associated with his trademark sound, from the disco-tinged "All I Do" (originally planned to be released by Tammi Terrell almost ten years previously) to the reggae-influenced smash "Master Blaster (Jammin)," which went straight to the top of the R&B charts.

While admittedly there are a few less-than-standard tracks, he closes the album on an amazing high note with one of the most aching ballads in his canon ("Lately") and a touching anthem to civil rights pioneer Martin Luther King, Jr. ("Happy Birthday").

While not on the same tier as Innervisions or Songs in the Key of Life, Hotter Than July is the portrait of an artist who still had the Midas touch, but stood at the crossroads of an illustrious career.
4.5 / 5 All Music Guide.

Side One:
Did I Hear You Say You Love Me
All I Do
Rocket Love
I Ain't Gonna Stand For It
As If You Read My Mind

Side Two:
Master Blaster (Jammin')
Do Like You
Cash In Your Face
Lately
Happy Birthday