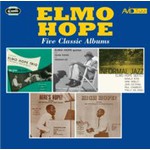 A close friend of Bud Powell, with whom he grew up listening and absorbing the sounds of jazz and classical music. The two chums also befriended another great musical maverick, the jazz composer and pianist Thelonious Monk. As a musician based in New York in the mid-1950s Elmo Hope fell in with some of the great musicians of the time including Clifford Brown, John Coltrane, Lou Donaldson, Art Blakey, Paul Chambers, Hank Mobley and Sonny Rollins. Unfortunately he also picked up another trend within the New York jazz scene, a drug habit! Forced to leave for Los Angeles he hooked up with saxophonist Harold Land for a while before returning once more to the Big Apple. More drug and health problems dogged his career which, combined with his more "out there" approach to playing and composing, probably accounts for his never finding the recognition he so well deserved. As you will discover on our five fine selections.