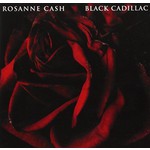 The circumstances that gave rise to Black Cadillac would test the resolve and talents even of a songwriter as fearless as Cash. Within a two-year period, Cash's mother, father and step-mother all died. Her mother, Vivian Liberto, the first wife of Johnny Cash, was an intensely private person, and her relationship with Rosanne, her oldest daughter, was extremely close. The album found its genesis in its title track, which, according to Cash, "was like a beacon, leading the whole process." Written six weeks before June Carter's death, a point at which no one suspected that she was even ill, the song seemed "foreboding" to Cash. To create a sound appropriate to her powerful subject, Cash worked with two producers: her husband and longtime co-producer and co-writer, John Leventhal (Shawn Colvin, David Crosby), and Bill Bottrell, who has worked with Sheryl Crow, Shelby Lynne and Linda Perry.