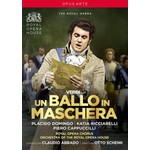 Illicit love, suspicion, deception and supernatural portents of doom lead to a shocking drama at a masked ball in 1790s Sweden. The incomparable Plácido Domingo stars as the dashing King Gustavus III, whose reforms have inspired talk of assassination among the conservative nobility. Katia Ricciarelli is Gustavuss beloved Amelia, married to his closest friend, Anckarström, sung by Piero Cappuccilli. Claudio Abbado conducts the distinguished cast, supported by the Orchestra of the Royal Opera House and Royal Opera Chorus, in Otto Schenks classic production of this Verdi favourite for The Royal Opera. This recording, with English subtitles, is preserved in its original Standard Definition and 4:3 picture format.

"What Schenk achieves...is no mean feat: a show in which the main characters meaningfully interact, have credibility and generate sympathy...[Domingo] is enjoying himself as a devil-may-care ruler with a twinkle in both eye and voice...[Cappuccilli] offers a masterclass in what we really mean by 'Verdi baritone'." Gramophone Magazine, July 2017

"The Orchestra and Chorus of the Royal Opera House are intelligently conducted by the great Claudio Abbado in this classic 1975 production directed by Otto Schenk, with traditional costumes and attractive sets. This is one of the finest productions of one of Verdi's best operas, with outstanding vocal and acting performances" New Classics, May 2017

"There's Claudio Abbado's fleet and polished conducting, then Plácido Domingo's suavely sung and acted Gustavus, and Piero Cappuccilli's stentorian Anckarström...Perhaps most interesting is Katia Ricciarelli as Amelia, a role a size too big for her, showing off both her stunningly limpid and velvety soprano and at the same time just how she pushed it to tatters." Opera Now, June 2017 ****