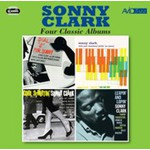 Considering he died at the tragically early age of 31, Sonny Clark actually had an amazingly prolific career in jazz, both as a leader and a sideman. At age 20, he was in California working with Wardell Gray and by 1953 was touring the States and Europe with Buddy De Franco. He hooked up as accompanist to Dinah Washington in 1957 in order to get back to the East Coast where he thought the work was. He was right! He became the "go to" pianist for many of the greatest names in jazz at the time including Grant Green, John Coltrane, Donald Byrd, Art Farmer, Dexter Gordon, Kenny Burrell, Jackie McLean, Hank Mobley, Sonny Rollins, Lee Morgan, Billie Holiday and a great many more. Most of this work was done with the legendary Blue Note label and in fact all nine of his own solo albums were recorded for the label.