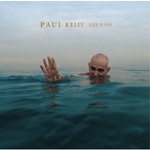 To everything there is a season. For Paul Kelly, it's time to get the electric guitar out of the case again. And make one of the most powerful albums of his career.

That's Life Is Fine, where Kelly fires up with a band of long-time musical friends, captures all the excitement of them playing live in the studio, and delivers a record that crackles with an energy reminiscent of his finest 80s recordings..

There are songs with an R&B groove like the sizzling opener, Rising Moon, jumping rockers like Firewood and Candles and Rock Out on the Sea and fun songs like Leah: The Sequel. The humorous tunes contrast with another of Kelly's exquisite songs of regret, Letters in the Rain, and the rich imagery at the heart of Petrichor.

Kelly agrees about the comparison with those albums he made with The Messengers like Gossip and So Much Water So Close To Home.

"I was aware of that as we were making it," Kelly says. "The guitar riff at the start of Firewood and Candles is like a Sunnyboys song. Those kind of guitar lines, nothing fancy but really strong, are like the ones Steve Connolly used to play with The Messengers. I can see a lot of parallels to those records I was making then.''

You Want It Darker
more suggestions…