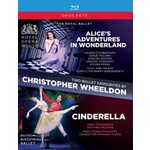 Christopher Wheeldon's acclaimed 'Cinderella' for the Dutch National Ballet is an imaginative interpretation of a muchloved classic. Inspired by the original Brothers Grimm fairy tale, Wheeldon gives the characters renewed depth and complexity, complementing Prokofiev's celebrated and colourful score. With sets and costumes by the renowned designer Julian Crouch, supported by stunning stage effects, this world premiere production is a truly magical experience, bringing an World-premiere production and filming.

Wheeldon's version takes a darker view, with more of the Brother's Grimm version of the story rather than the traditional 1697 Charles Perrault fairy tale.

Extra features include: 60 Wigs, Cast interviews and a Choreographer's Commentary with Christopher Wheeldon.

"The joined talent of the British theatre designer Julian Crouch, the American video projection designer Daniel Brodie and the puppeteer Basil Twist created a magical, colorful and often visually dizzying canvas wherein Wheeldon's choreography moves the action forward in a fluent, almost cinematographic manner. The video and audio quality are outstanding for this release...color definition, contrast, sharpness all make for a very impressive and enjoyable viewing experience. Sound-wise this Cinderella is a treat as well." ClassicalNet on Cinderella

"What a treat this is - such an imaginative treatment of a favourite story. There are extraordinary, eccentric sets and special effects; colourful, larger-than-life, argumentative characters and extraordinary costumes. Lauren Cuthbertson, as Alice, is excellent, her every movement suggesting the actions and emotions of this curious, spirited pre-adolescent... Christopher Wheeldon's choreography is very imaginative and fitting for every character" (MusicWeb on Alice's Adventures in Wonderland)