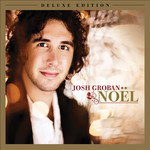 $20.00 In stock with supplier
ETA: 2-5 business days add to cart more by this artist

Originally released on October 9, 2007, this Grammy nominated holiday recording remains one of the best-selling Christmas albums of all time. This deluxe version will has the original 13 tracks and six additional songs, including four never before released new recordings.

Christmas Time Is Here - duet with the legendary Tony Bennett. This incredibly famous, cross generational song from "A Charlie Brown Christmas" will surely be a hit at family Christmas parties.

Have Yourself A Merry Little Christmas - following Josh's platinum album Stages, he wanted a holiday song that matched the theme of Stages and found that in this famous Christmas song from the show/film Meet Me In St. Louis.

Happy Xmas (War is Over) - the poignant, classic Christmas song written by John Lennon & Yoko Ono with a powerful message that seems more relevant now than ever.

Believe - the Academy Award-nominated song from the Polar Express film soundtrack, never before available on a Josh Groban release.

1. Silent Night
2. Little Drummer Boy
3. I'll Be Home For Christmas
4. Ave Maria
5. Angels We Have Heard On High (duet with Brian McKnight)
6. Thankful
7. The Christmas Song
8. What Child Is This?
9. The First Noël duet with Faith Hill
10. Petit Papa Noël
11. It Came Upon A Midnight Clear
12. Panis Angelicus
13. O Come All Ye Faithful (with the Mormon Tabernacle Choir under the direction of Craig Jessop)
14. White Christmas
15. Christmas Time Is Here (duet with Tony Bennett)
16. Have Yourself A Merry Little Christmas
17. Happy Xmas (War Is Over)
18. Believe
19. O Holy Night