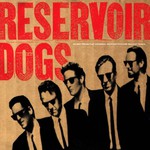 Soundtrack from the 1992 American crime thriller that depicts the events before and after a botched diamond heist. The film was the feature-length debut of writer and director Quentin Tarantino, and stars Harvey Keitel, Michael Madsen, Steve Buscemi, Chris Penn, Lawrence Tierney and Tim Roth.

As became a trademark of Tarantino's following films, the music plays such a pivotal role in the overall aesthetic of Reservoir Dogs that it could be said it was another character.