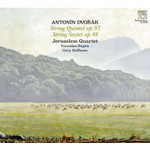 He had just made his decisive breakthrough. More or less overnight, Antonín Dvorák, now thirty-six years old, had risen to the front rank of European composers - and had done so with works that bore their national, popular aura in the title.

The first book of Slavonic Dances for piano four hands, written within a few weeks at the beginning of the year 1878, had become a genuine hit with the public, even beyond the borders of Bohemia, and seemed to be wrought from the very stuff that was henceforth to be the main source of musical invention for this tirelessly searching mind. The resulting mood was euphoric, the creative urge immensely productive. Just a few months later, in May 1878, Dvorák explored the question of how far the style-defining characteristics of the dances could be transferred to other genres in the formal tradition of the sonata and the symphony, and especially his preferred medium of chamber music. Finally, after only a fortnight, the finished score of a string sextet in A major lay on his desk, answering that question not just adequately but in highly impressive fashion.

On the one hand, the four-movement work, premiered by the augmented Joachim Quartet in Berlin at the end of July 1879 and published by Simrock shortly thereafter, confronts the influence of the Austro-German school in a very responsible, indeed emphatic manner. That is so in respect of both its alignment with formal structural principles of a classical nature and, above all, its strong emphasis on motivic-thematic work. It is unmistakable how closely Dvorák sticks in his op.48 to the example of Johannes Brahms when it comes to underpinning the largely textbook sonata form of the opening Allegro moderato with a complex web of innumerable little motivic derivatives, thanks to which each subsidiary voice is assigned a structural value in its own right. Thus the choice of forces for his 'test piece' (it was to remain the only one of its kind in Dvorák's catalogue of works) with regard to the two string sextets of his revered colleague, eight years his elder, was probably no coincidence. On the other hand, it is the spontaneity of inspiration that captivates. 'That fellow has more ideas than all of us', a dumbfounded Brahms is said to have declared in 1875 when a score by this previously unknown Bohemian came into his hands for the first time. 'Anyone else could pick up their main themes from his rejects.' And years later, on the occasion of a Viennese performance of Dvorák's Sextet, it was Brahms again who enthused to his friend the composer and conductor Richard Heuberger over its 'wonderful invention, freshness and beauty of sound', observing 'I always have the feeling that people don't admire this piece enough'.

"It's a comparable masterpiece [to the New World Symphony], played with depth of tone and feeling in the larghetto variations and tremendous dash in the outer sections of the allegro vivo and finale." Sunday Times

"[The Jerusalem's] sound is that bit clearer, richer and warmer, and their slightly more leisurely approach brings out even more gratefully the sumptuous indulgence of Dvořak's orchestration for strings...They play with verve and irreproachable unanimity but there is even more depth in the lower string tones. I am also particularly impressed by their attention to the shading of dynamics and their feeling for rubato in the pulse of this music. Just listen to the first few bars of Op. 97 and you are instantly transported into Dvorak's special sound world." Recording of the Month MusicWeb March 2018

"Performances that ooze warmth and passion, and at the same time achieve a nimbleness and zeal that let the music erupt with freshness and fizz...These are truly fascinating works, presented here with deserving affection." The Scotsman