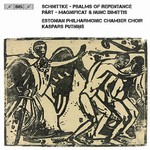 Alfred Schnittke and Arvo Pärt lived through times of remarkable change in the last decades of the Soviet Union. From the 1970s, state restrictions on religion were gradually relaxed and this was reflected in the arts and especially in music. Schnittke's adoption of Christianity was triggered by the death of his mother in 1972, and culminated in his later conversion to Catholicism. Pärt was from a nominally Lutheran background in Estonia, but embraced the Orthodox faith in the 1970s, following intensive study of liturgical music. Both composers began to incorporate religious themes into their work, moving away from the modernist abstraction that had characterized their early careers.

Schnittke's large-scale Psalms of Repentance were composed in 1988 for the celebrations for the millennium of Christianity in Russia. The texts come from an anonymous collection of poems for Lent, written in the 16th century, and in his settings Schnittke engages with the traditions of chant-based Orthodox liturgical music. The Estonian Philharmonic Chamber Choir and Kaspars

"We live in a golden age of choral music with exceptional choirs who can tap in to a wealth of repertoire. The Estonian Philharmonic Chamber Choir sound sublime on this disc and Schnittke's Psalms of Repentance (1988) is a revelation. This work can be likened to Rachmaninov's vespers (the All-Night Vigil) in present time, every bit as magnificently Russian" Nicholas Butler/Marbecks

"The Estonians have always rejoiced in a warm, rich sound and perfect blend, and guided by the utterly precise and dynamic Kaspars Putninš they give here a truly outstanding rendition that picks up every emotional and spiritual nuance with no sacrifice of technical perfection...This work has been waiting for choirs able to do this, because the technical challenges are not the most important thing about this music" Gramophone Editor's Choice March 2018

"Although the two works were written about a decade apart, they are an excellent choice for a listening session. Performed by the Estonian Philharmonic Chamber Choir, conducted by Kaspars Putnins, the sound is ethereal and compelling. The recording venue, the St. Nicholas Church in Tallinn Estonia is a perfect match for this music. I listened to the 5.0 mix on the SACD layer and it was a lovely sound, with a superb performance by the Estonians. One simply gets lost in this emotional music. It's interesting to hear music from Schnittke's later period, and Pärt's music is always welcome and refreshing. Highly recommended." AudAud.com May 2018