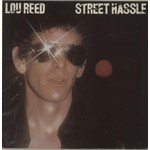 Street Hassle' is the eighth solo studio album by Lou Reed, released in February 1978. Richard Robinson and Reed produced the album. All of the songs on 'Street Hassle' were written by Reed, including "Real Good Time Together," a track that dates back to his days as a member of the Velvet Underground.

The album was met with mostly positive reviews, "Raw, wounded, and unapologetically difficult, Street Hassle isn't the masterpiece Reed was shooting for, but it's still among the most powerful and compelling albums he released during the 1970s, and too personal and affecting to ignore.